Titanium One portable SSD: Mobile performance for your rugged lifestyle

Finding a quality portable external drive, one that can take a beating as well as it can safely store your files, can be difficult. The Titanium One Portable SSD aims to deliver the blazing-fast speed of Solid State Drive tech combined with an aggressive build to become the perfect storage companion for a rugged lifestyle.

I tested out the 240GB Titanium One to see how it performed compared to other Hard Drives and portable SSDs, and to see if it measured up to its claims of being tough enough to survive under harsh conditions. The Titanium One line of portable SSDs also come in 120GB, 500GB, 1TB and 2TB models.

A Powerhouse that Withstands the Elements 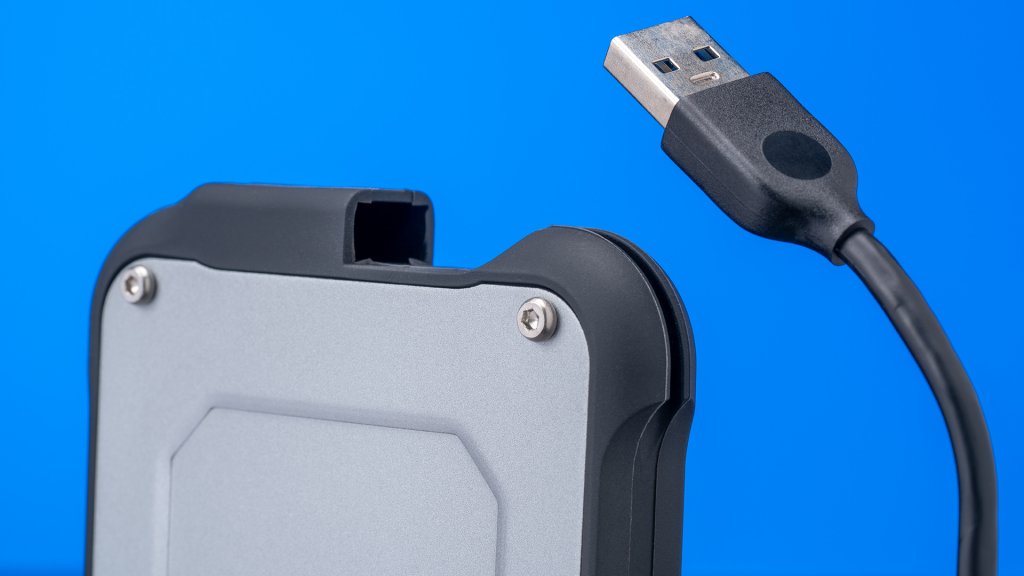 Platinum Micro, the company behind the Titanium One, designed the Titanium One to deliver the HDD-beating performance of an external SSD in a housing that can keep up with someone with a rugged lifestyle. This is the first run that Platinum Micro has taken at portable SSDs, and they came out of the gate swinging.

The Titanium One connects via USB 3.0 and reaches read-write speeds up to 450 MB/s. It utilizes 3D NAND technology for superior performance over the previous generation SSDs. While older flash memory drives laid out memory cells across a flat plane, 3D NAND memory cells are precisely stacked atop each other, improving data writing performance and reliability.

Your average SSD is already more reliable than most hard drives, thanks to a lack of moving parts. The Titanium One ups the ante with a rugged aluminum body and shock-absorbing silicone bumper. The drive is IP66 rated, so it protects against dust and dirt and is resistant to splashes and light rainfall.

The Titanium One connects to your devices via a built-in USB 3.0 cable. Having the cable attached is a nice little convenience feature for transporting the drive, which makes it easy to wrap around the silicone bumper and safely tuck into a small pocket along the edge. No more having to worry about leaving your cable at home or getting tangled up in your bag.

As a user of both Windows and Mac, I wanted to test the Titanium One on each of my computers to see how it stacked up to their internal drives. In my Windows desktop, I’m running a simple 1TB 5400rpm HDD, while my MacBook Pro sports a Sandisk 480GB SSD connected over SATA.

I fully expected the Titanium One to blow away the HDD in my Windows computer, and I was right, but not in the ways I expected. I ran a few different tests to get a good feel of the Titanium’s potential. First, I performed some speed tests on the drive using the CrystalDiskMark speed test program, the results of which are below.

Using a 4GB test file size, the Titanium One blew away the HDD handily by every measure. To contextualize the above image, the “Seq Q3211” is a measurement of the sequential read and write speeds of the drive, or the reading and writing for adjacent blocks of data across the drive. The remaining tests show a random 4 KiB (4 kibibyte) size read and write.

The number following the “Q’ and “T” in the test refers to the number of Queues and Threads respectively; queues are requests to the disk, while threads are the number of simultaneous requests. For the sake of comparing the Titanium to other drives in testing, I primarily focused on the sequential speeds, which were impressive in their own right, turning in read and write speeds more than double those recorded by my HDD. In the random 4KiB read and writes, the Titanium dwarfed my hard drive’s performance, as you can see.

For a more real-world use of the Titanium One, I wanted to find out if the drive could improve performance in my favorite games, particularly some open world games that tend to take a while to load in the game environments.

I first checked out Mafia III on my HDD, clocking in a loading time from the start menu to the game of about 45 seconds. After measuring some more loading screens in the game, I uninstalled it from my internal drive and reinstalled it on the Titanium One. The initial results were already encouraging; loading from the start menu to the game only took about 23 seconds when installed on the SSD, almost cutting the load time in half. Assorted loading screens in the game similarly loaded faster than on my HDD.

Bottom line: if you’re looking for some solid add-on storage for more games, the Titanium One portable SSD is a simple solution. 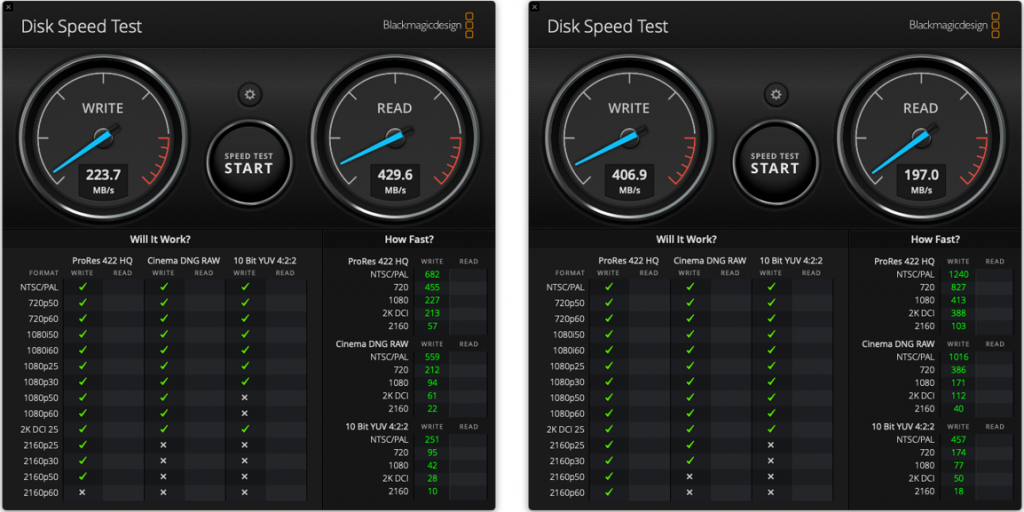 Testing with my Macbook was a little more interesting since I was now comparing the Titanium One to another SSD. Now I could see how the Titanium compared to an internal SATA SSD instead of the sputtering old drive on my desktop, which should be more of an “apples to apples” comparison of its proficiency.

The Sandisk drive in my MacBook uses planar flash storage instead of the faster 3D NAND memory employed by the Titanium, but I wasn’t sure how the bottleneck of USB would affect the performance of the external. The results weren’t what I expected. Again using a test file size of 4GB, this time on Blackmagic Disk Speed Test (an app available on the Mac App Store) I compared the two SSDs.

While the SanDisk demonstrated superior read speeds, likely owing to its SATA connection, the Titanium One blew it away it in write speeds. This was my first time testing a 3D NAND drive, and while I knew to expect a writing performance advantage in the Titanium, I didn’t expect it to be more than twice as fast as my planar SSD.

It should be noted that my 2012 Macbook Pro is by no means a gaming powerhouse. I’m running a 3rd gen i5 without any dedicated GPU and only 4GB of RAM. I loaded up Portal 2, a game that pushes my poor GPU-less Mac to its limits. This time, I found no discernible difference in load times between my internal drive and the Titanium One. Each drive loaded the game from the start screen to my saved game in about 25 seconds, with perhaps a one or two-second advantage on the SanDisk.

Considering the results from the speed test, I expected significantly faster load times on the internal drive, but that didn’t bear out even over multiple times restarting and loading the game on both drives, and navigating between various menus and game save files.

While none of the performance results turned in by the Titanium One were particularly unexpected — though the writing performance was a pleasant surprise to me — the tests show that the drive is a worthy option that delivers what you would expect from a fine SSD. It isn’t industry-shaking performance, but that’s not really the point. Where the Titanium One really excels beyond anything else is in its build quality.

Is it Tough Enough? 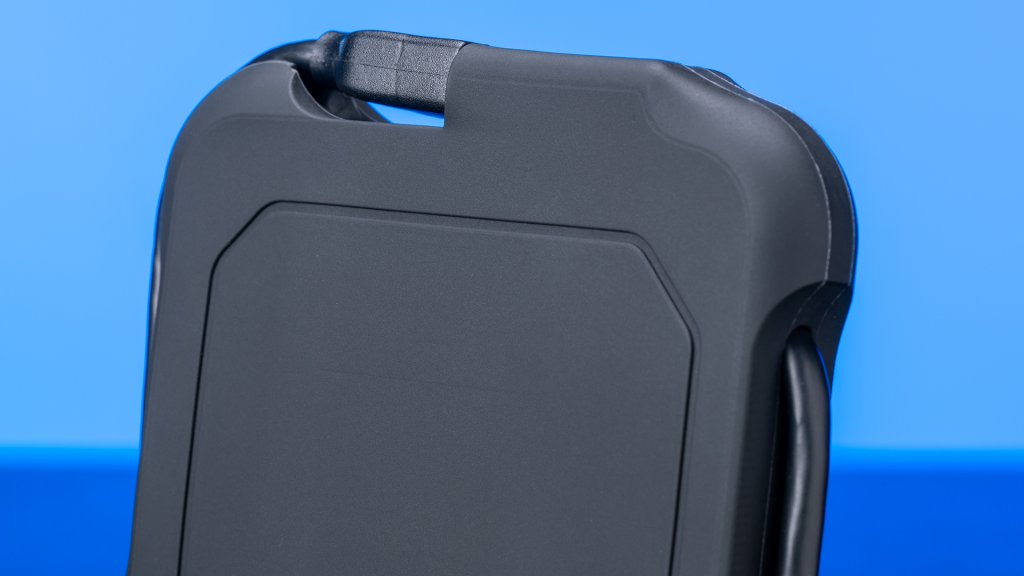 So, the Titanium One is a great portable SSD for gaming, general data transferring and storage, but its standout feature is its rugged build quality. This isn’t something you usually hear discussed when evaluating portable SSDs, so that in itself is interesting.

Platinum Micro talks a big game about the Titanium One being a robust and durable drive. Could it really be as tough as they claim? I designed a little gauntlet for it to just how harsh of conditions it can handle without buckling under pressure, at least within realistic use.

Before embarking on this overview, I chatted with my coworkers about putting this through a durability test. I mentioned wanting to run it over with a car, which was met with laughter. Well, the joke’s on them, because I actually did!

I took the Titanium One into the Newegg parking lot and placed it behind the tire of my 2010 Mazda 3. My Mazda is a compact sedan, so it’s not like I was running over the drive with a Mack truck or anything, but according to manufacturer specifications, it still weighs in at around 3000 pounds, enough to send many electronics to the scrap heap if run over.